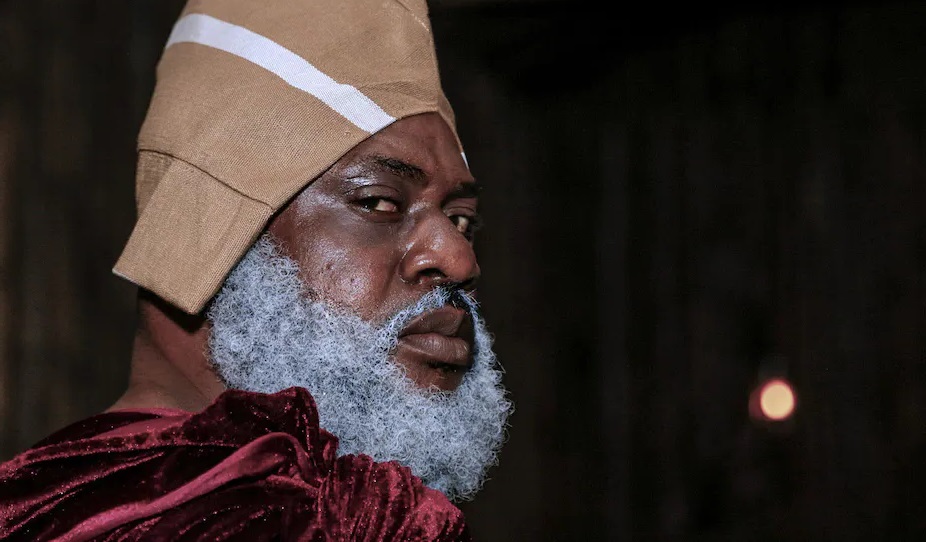 Beloved director Biyi Bandele’s last movie is the adaptation of a revered classic, as well as a sharp and unforgiving look at the hubris that typified colonialism. But in its totality, it’s a jarring fable about the never-ending clash between tradition and modernity, all in a beautifully-realized film.

‘After his king dies, a horseman must sacrifice himself to serve his ruler in the afterlife but sudden distractions lead to unexpected tragedy’. The plot of director Biyi Bandele’s final film appears to be simple and straightforward, but a closer look reveals a modern masterpiece that is nuanced and layered in many ways which many Nigerian filmmakers have not been able to achieve. And for an anti-colonial tale, that’s saying quite a lot. But then again, there’s more to it. There’s also the not-so-little detail that it’s based on what is considered to be the magnum opus of Nobel laureate Wole Soyinka, the play ‘Death and The King’s Horseman’.

The titular king’s horseman has the unenviably terminal job of ensuring the smooth journey of the late Alaafin to the afterlife, but when the day for his ritual suicide comes, he is having too great a time. A last-minute wedding to a young damsel who’s caught his eye sets events in motion, dragging into the story an incredibly tone-deaf colonial British official and his waifish wife, as well as the entire community, in a tug-of-war between tradition and modernity, leaving the viewer wondering which one is genuinely representational of ‘civilization’. Events cross into each other, pitting character against character, resulting in an unexpectedly tragic end for a major character.

Colourful in all the right ways, and heavy when it needs to be, Bandele’s adaptation of Soyinka’s enduring play is itself in many ways an instant classic, buoyed by a number of factors

Colourful in all the right ways, and heavy when it needs to be, Bandele’s adaptation of Soyinka’s enduring play is itself in many ways an instant classic, buoyed by a number of factors, chief among them the film’s stellar cast. While Odunlade Adekola is as usual charismatic in the title role, the performance with the most gravitas remains that of Deyemi Okanlawon, who plays his son, back from studying in Britain, yet remaining fiercely in alignment with Yoruba traditions and culture. The talented Mr. Okanlawon gives life to Olunde with method acting-like attention to detail, resulting in a character that is truly multi-dimensional.

Okanlawon’s brilliant turn has enough gravitas to carry the whole movie, and his quiet storm countenance is reminiscent of early-day Sidney Poitier, perfect for conveying his disdain for British disrespect. One of the best scenes in the film – and indeed in any Nigerian film this year – remains the deceptively casual conversation he has with the British official’s wife (played to perfection by Jenny Stead), during which he floors her off her high horse with words that are not violent, but a glare that is deadly. If the actor ever needed to stamp his greatness, his performance here does it perfectly.

[Deyemi] Okanlawon’s brilliant turn has enough gravitas to carry the whole movie, and his quiet storm countenance is reminiscent of early-day Sidney Poitier, perfect for conveying his disdain for British disrespect.

That said, the sheer quality of the cast alone is worth the price of admission, as they deliver powerful performances – including the scene-stealing Shaffy Bello as female elder Iyaoloja – and a strikingly memorable one by Jide Kosoko as a comically stoic native law enforcement officer. Mark Elderkin, too, exudes a nonchalance that’s both irreverent and dangerous. Singer Brymo also shines in his feature film debut, as do the other cast members. It is quite easy to deliver greatness, by dint of the source material’s brilliance. Though written in English, it was adapted mostly in Yoruba, bringing a weight that anchors the film as it should be.

The music of ‘Elesin Oba’ is so well-realized that it is practically a character in itself. Featuring Yoruba drums and chants in a way that could make it pass for a musical, the film’s stage origins are clear in the most complimentary way, giving off a tone reminiscent of classic Rodgers and Hammerstein musicals like ‘The Sound of Music’, ‘The King and I’, et cetera, et cetera, no pun intended. It is also backed up formidably by songs performed by the always-compelling Brymo. The overall tone one gets is like that of old Hollywood classics.

That said, the sheer quality of the cast alone is worth the price of admission, as they deliver powerful performances – including the scene-stealing Shaffy Bello as female elder Iyaoloja

Full of powerful performances, gorgeous production design, vibrancy, and stunning originality that is needed in Nigerian movies today, Bandele’s film does the rare thing of being a period piece so well-put together, so intricately-tailored, that it seems to address the current global zeitgeist of racism, otherness, and more without appearing even remotely preachy or arrogant. Add to that the fact that ‘Death and The King’s Horseman’ is based on real events circa 1947, and you have what is unquestionably the best Nigerian film of 2022. Bravo!

A version of this article was published in the Daily Trust newspaper on Saturday, 17 Dec. 2022, as well as online.